I made my first Kasa Obake drawing in 2015, and I enjoyed it so much that I decided to make another. Click this link to see last year's Kasa Obake, and to learn more about the history of this character from Japanese folklore. Here is the 2016 reboot: Photoshoot: There, I Fixed it.

My dad tried to reconstruct the face of one of my childhood My Little Pony dolls that got chewed by a rat. He says he thinks it turned out good as new, but I dunno … 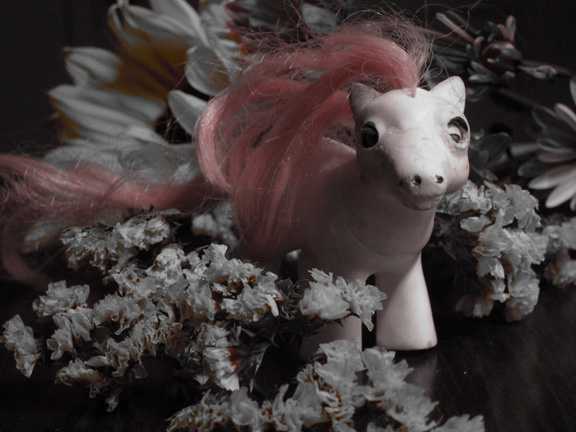 This toy was brand new in the 80's or early '90's. When it was new, I'm sure it was very cute. Nowadays it reminds me of that old horror movie, Eyes Without a Face. 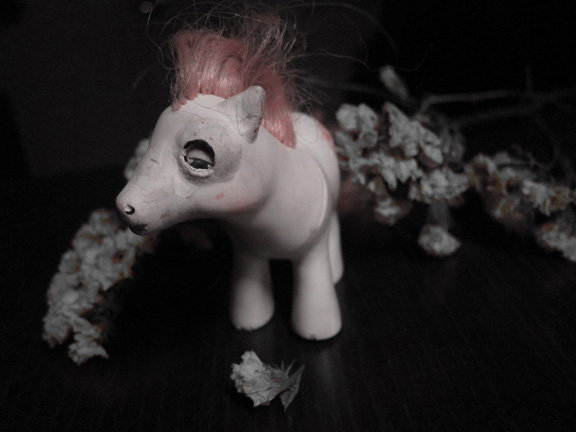 Only one of its eyes is still capable of blinking, the other is stuck in a half-open position. 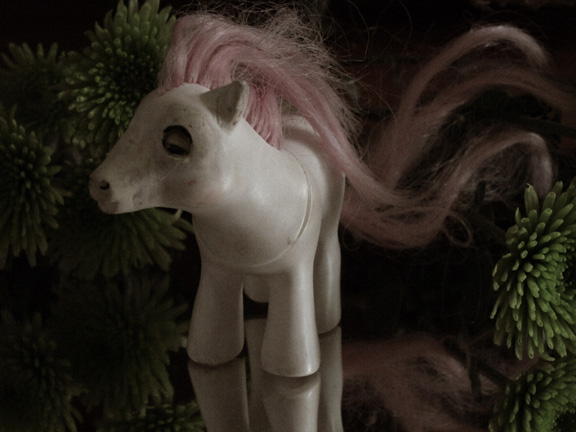 As damaged as it is, I really like this faceless pony ghoul. It has personality.

In the earlier version, the skeleton sort of looked like he was flying... instead of doing an ollie. Now that the crucial banana peel has been added below his board, he appears to be skating on a road and not flying through the cosmos. Kasa-Obake is a strange type of mischievous spirit from Japanese folklore called a Tsukumogami.

It's said that a Tsukumogami is born from a useful household object when it reaches its 100th year of existence. The object receives the gift of self-awareness in payment for its many years of helpful service. 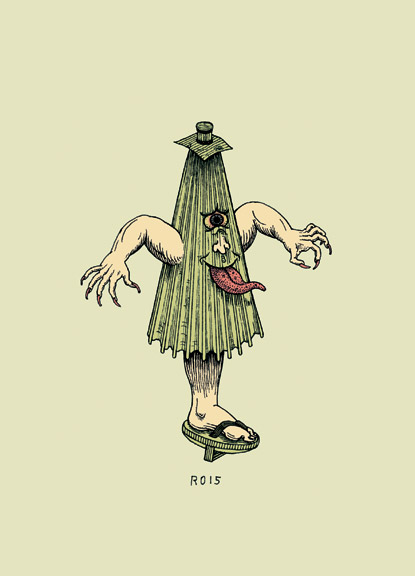 I tried to draw the pot smoking Geisha in a simple and clean style like in the old Japanese Ukiyo-e woodblock prints. The color palette is Mœbius inspired. 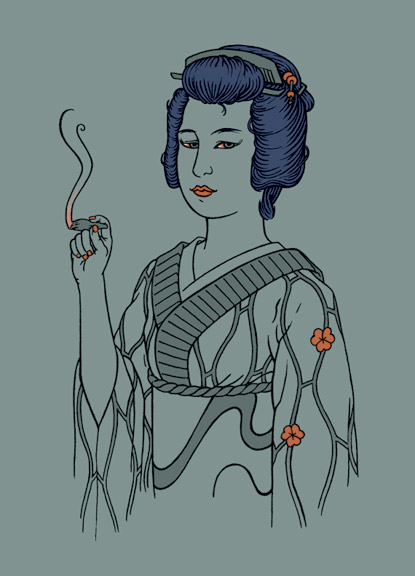 I originally tried to draw this in 2008, but I left my sketchbook containing the first skateboarding skeleton image on top of my car, and then drove off. I didn't know it at the time, but all of my art flew into the road when I hit the first curve. Several hours later I realized what happened and hunted down my roadkill artwork. There wasn't much left of it.

About a year ago I saw the scrap of paper that had my first skateboarding skeleton rough sketch, and I decided that I still liked the idea and was finally ready to take another shot at finishing it.

Here is my most recent drawing: 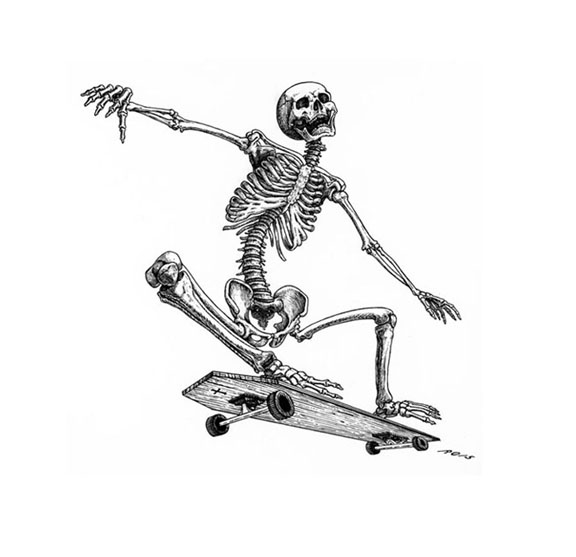 ...And here is the first drawing that got run over by traffic (oops!): 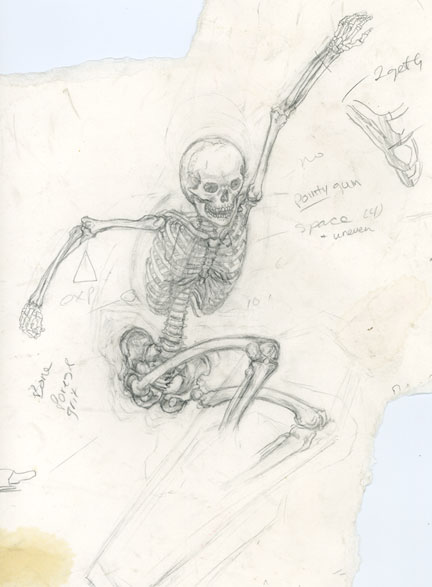 I used to love to skate, but after several years, I fell really hard and I realized (for the first time ever) that skating was dangerous and I was not invincible.

Thanks to all the people who went skating with me back in SB. Those were some good times.
Posted by Sensible Rita at 5:16 PM 4 comments

I've been working on this one since January. It has been sitting around for over a month now while I've been deciding whether or not to declare it as finished work. Finally, yes, I can say for certain that it is finished.

There's nothing too profound to say about the concept. The idea just kind of came to me one night: 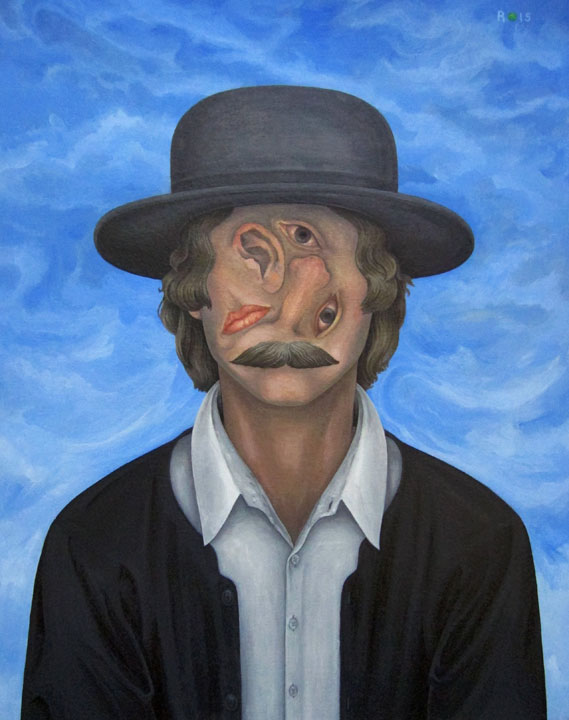 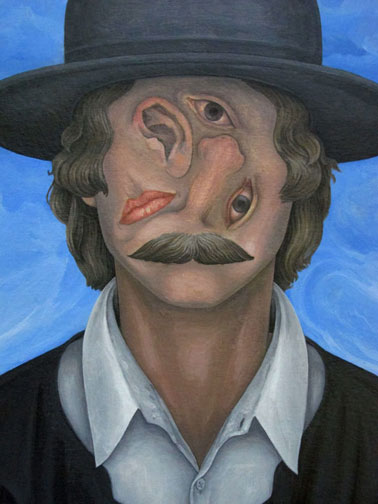 Sensible Rita
I am a thirty-something graphic artist based in Sacramento. I love traveling, nature, art, and hilarious animated gifs. All work on this site © Rita O. unless otherwise indicated.